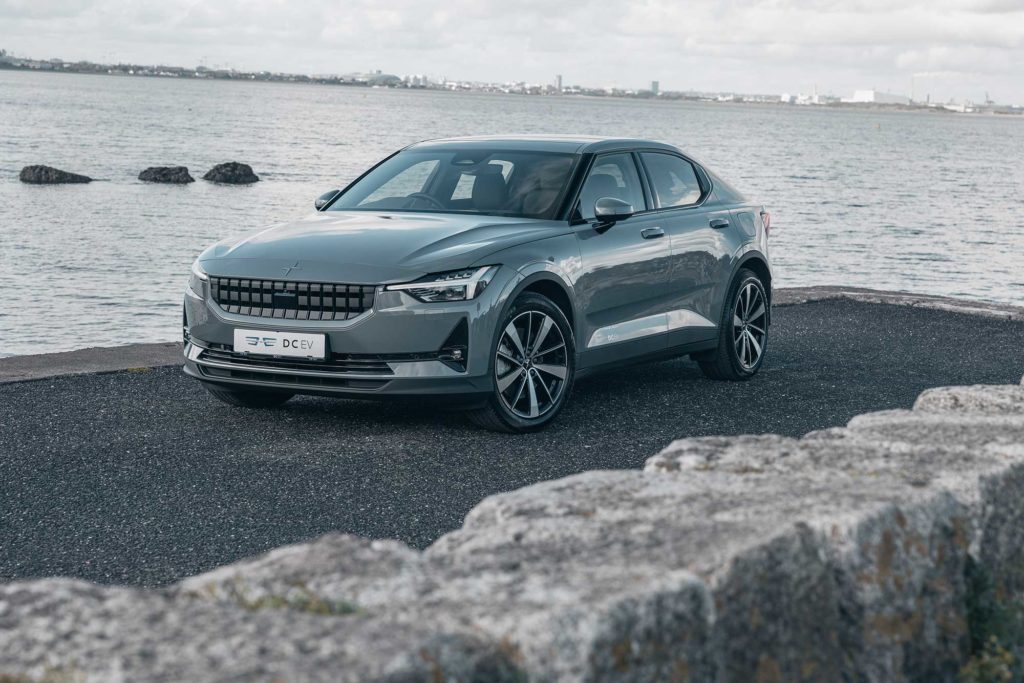 The Polestar 2 is Scandi cool with hot performance.

While it isn’t quite a household name yet, Polestar, part of the Geely Group that owns Volvo and Lotus Cars, is already making waves in the electric car world. Following the jaw-dropping beauty of the Polestar 1, a limited-run, high-performance plug-in hybrid GT car, the Sino-Nordic brand enters the mainstream with its second car, called the Polestar 2. Launched initially with a dual-motor all-wheel-drive version reviewed here, a single-motor version is also available. It places the Polestar as a genuine rival to the Tesla Model 3 and BMW i4. 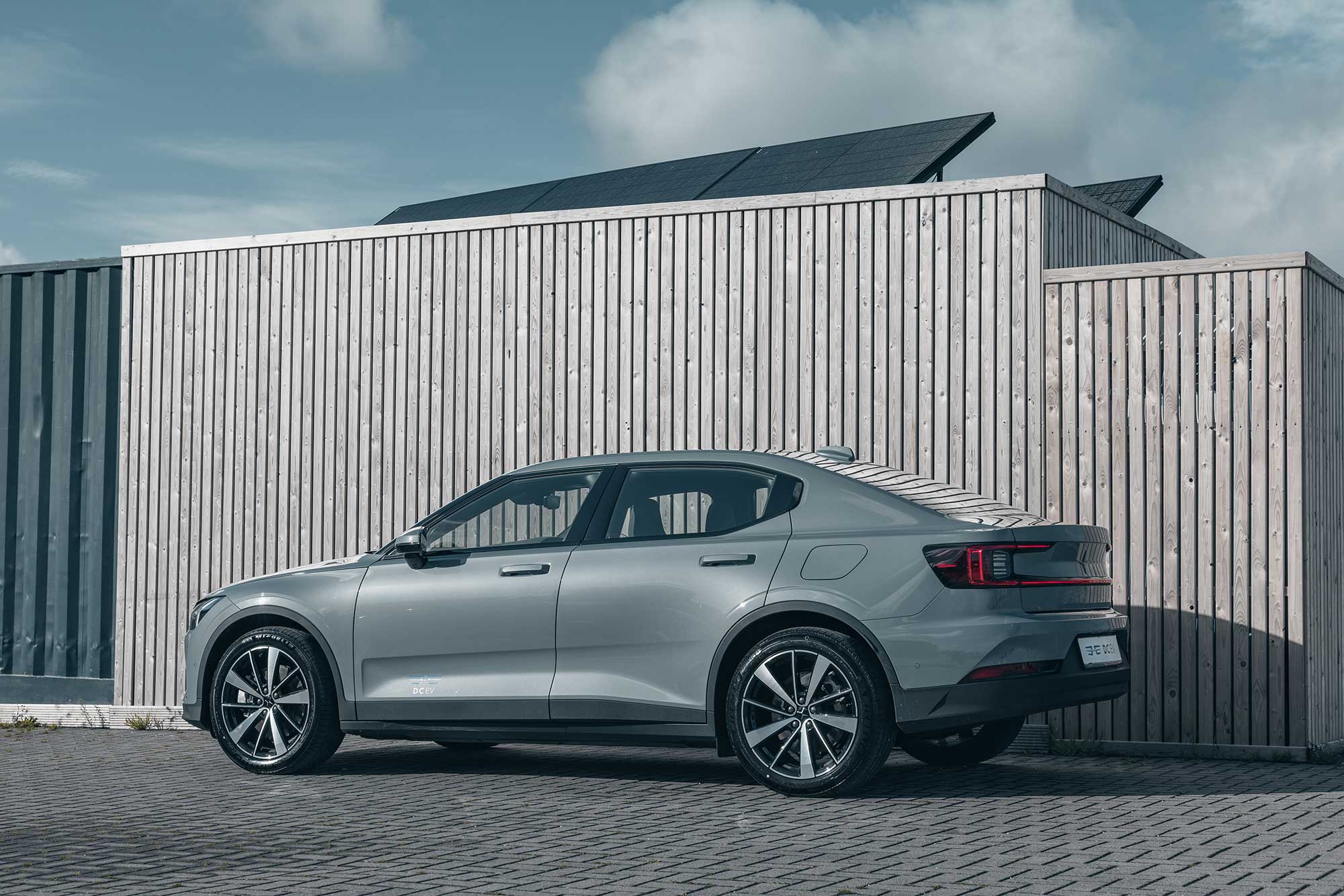 The Polestar 2 adopts the three-box silhouette seen in saloon cars, but the sticks with a more practical hatchback design. Its bodywork is a mix of sharp lines and gentle curves to highlight its solid appearance. There are flashes of Volvo influence in places, partly due to some commonality of parts. However, Polestar does have a clear design language of its own that is visible in details such as the blocky grille and highly distinctive rear light element that oozes cool with its animated display when the car locks and unlocks. Having a beefy 78kWh battery sandwiched into the floor of the Polestar 2 led designers to give it a crossover influence with dark cladding along the sills and wheel arches, giving the car a slightly lifted appearance. 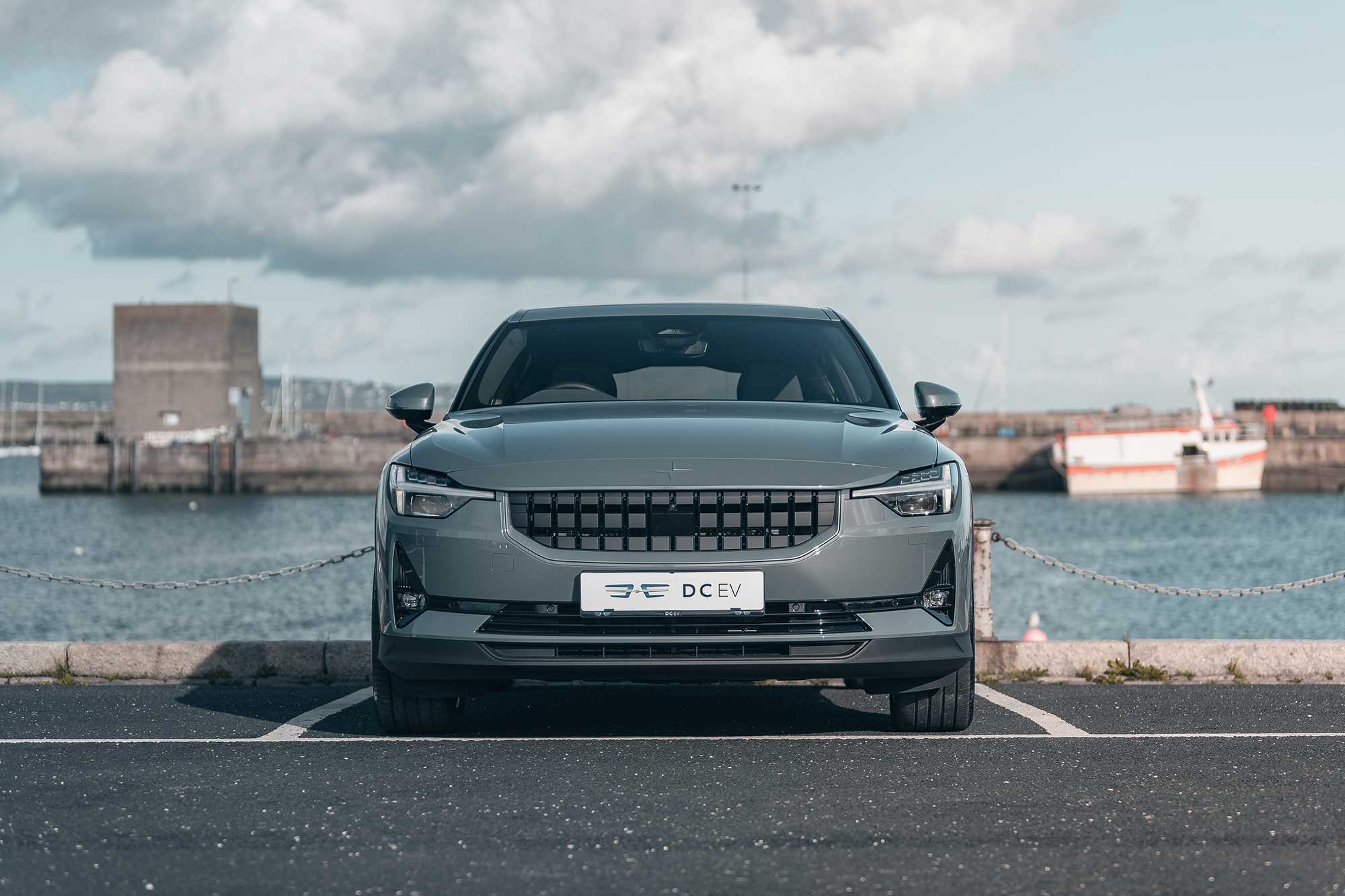 One of the main draws for Polestar 2 is that sizeable 78kWh battery. Enough for a claimed driving range of up to 470 kilometres, it has plenty of juice for drivers to make the most of that dual-motor setup. The Polestar 2 has an 11kW onboard AC charger that can fully recharge on a 7.2kW domestic wallbox in around 12 hours or 8 hours from an 11kW unit. With its CCS connection can see the battery rapidly charge up to 80 percent in a time of 35 minutes, providing you can find a suitable 150kW DC charger. The more common 50kW chargers can refill it in around 65 minutes. 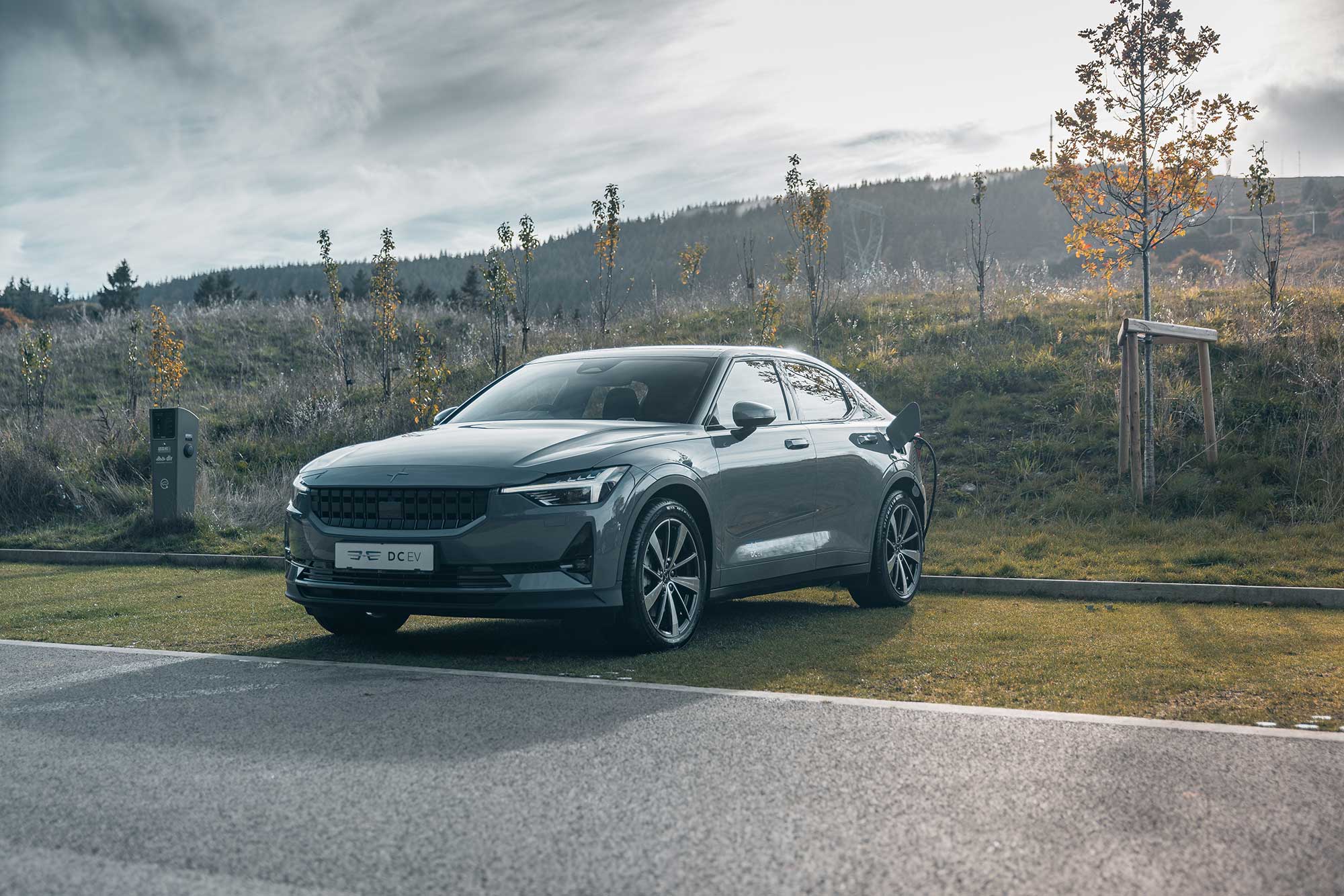 Even though the Polestar 2 is a purely electric vehicle it lacks the airy, spacious cabin that we’ve seen from other models. It seems more like a combustion-engined car due to how the interior is laid out, in contrast to the open look of cars like the Tesla Model 3 and the smaller BMW i3. 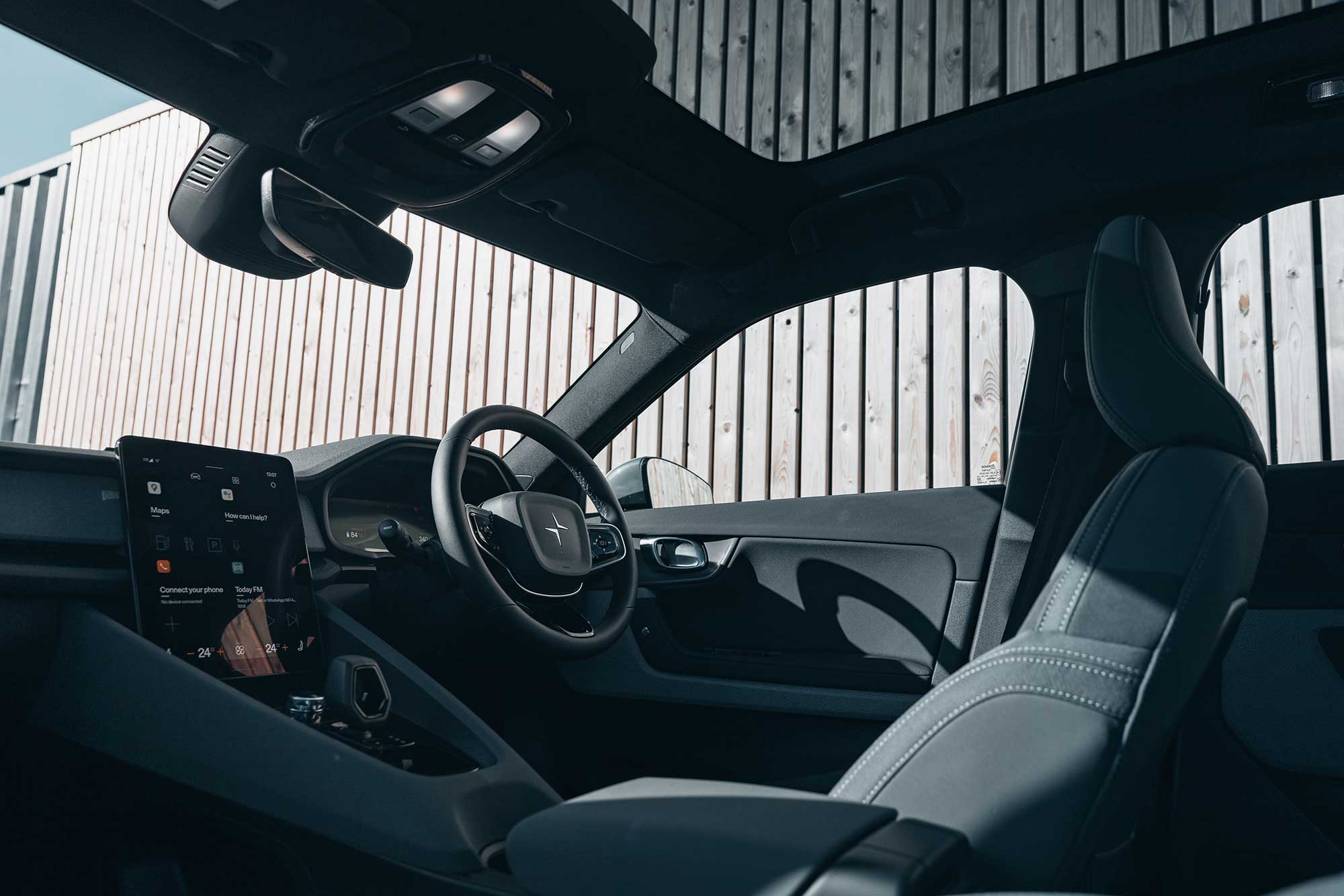 Material quality is high and there are numerous designs available, including tasteful details such as slate inserts, ventilated Nappa leather and reconstructed wood. You begin to discover some lovely elements as you spend more time with the car. An illuminated Polestar logo reflects onto the glass roof and that unusual drive selector fits rather nicely into your hand. The steering wheel and column controls are shared with Volvo, as is the digital instrument display. 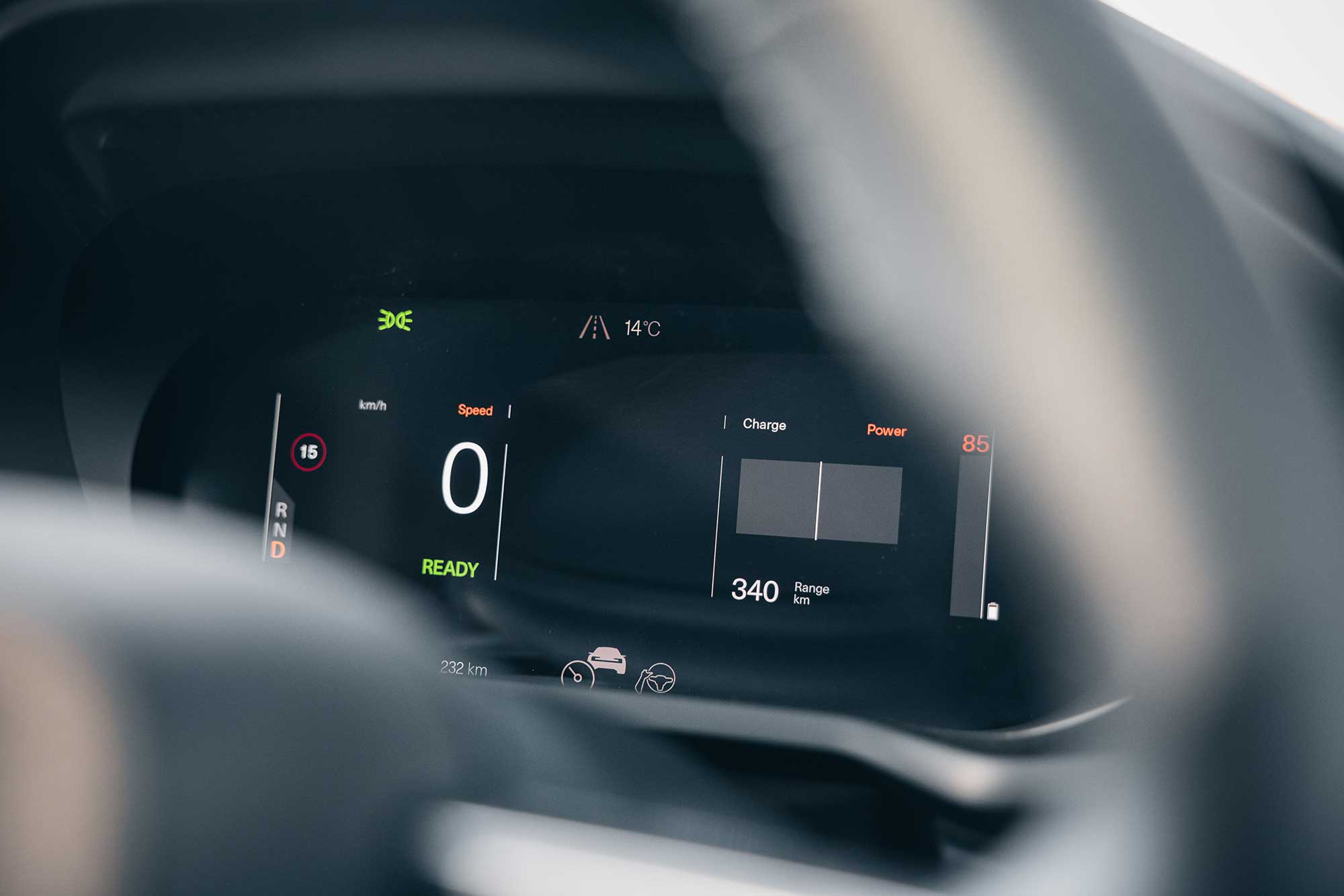 Keen to do things differently as a car brand, even the infotainment system is a departure from what is typically seen. By directly integrating Google technology and software, the menu system is more akin to what you would find on a smartphone. The 11-inch portrait touchscreen looks high-end and works well. 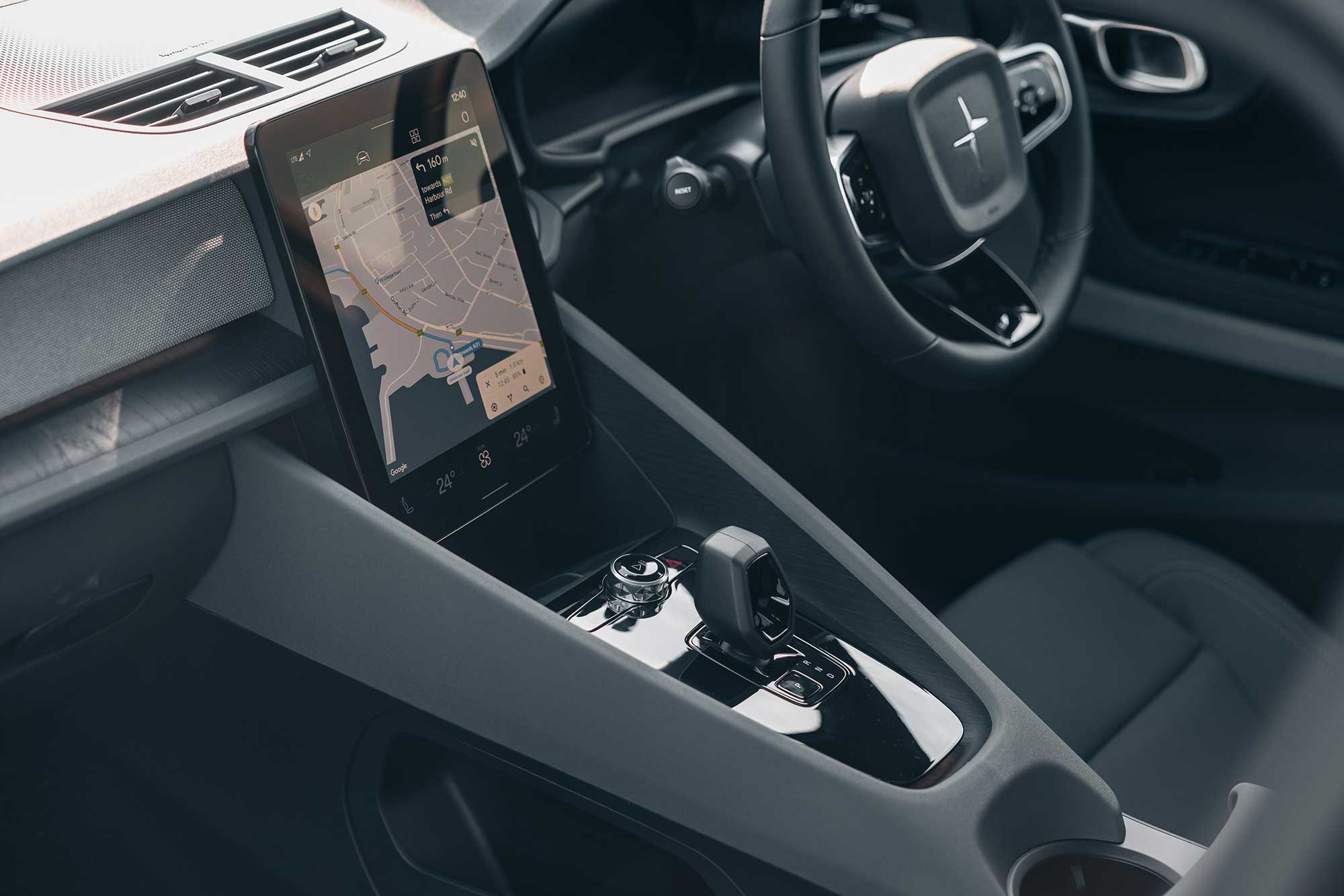 Being a hatchback design gives it a plus point over the Model 3. However, the overall capacity is less than the Tesla, measuring only 440 litres in total, with 41 litres of that being under the floor while a further 35 litres being found in the front boot. Dropping the rear seats down raises the cargo capacity to 1,095 litres. 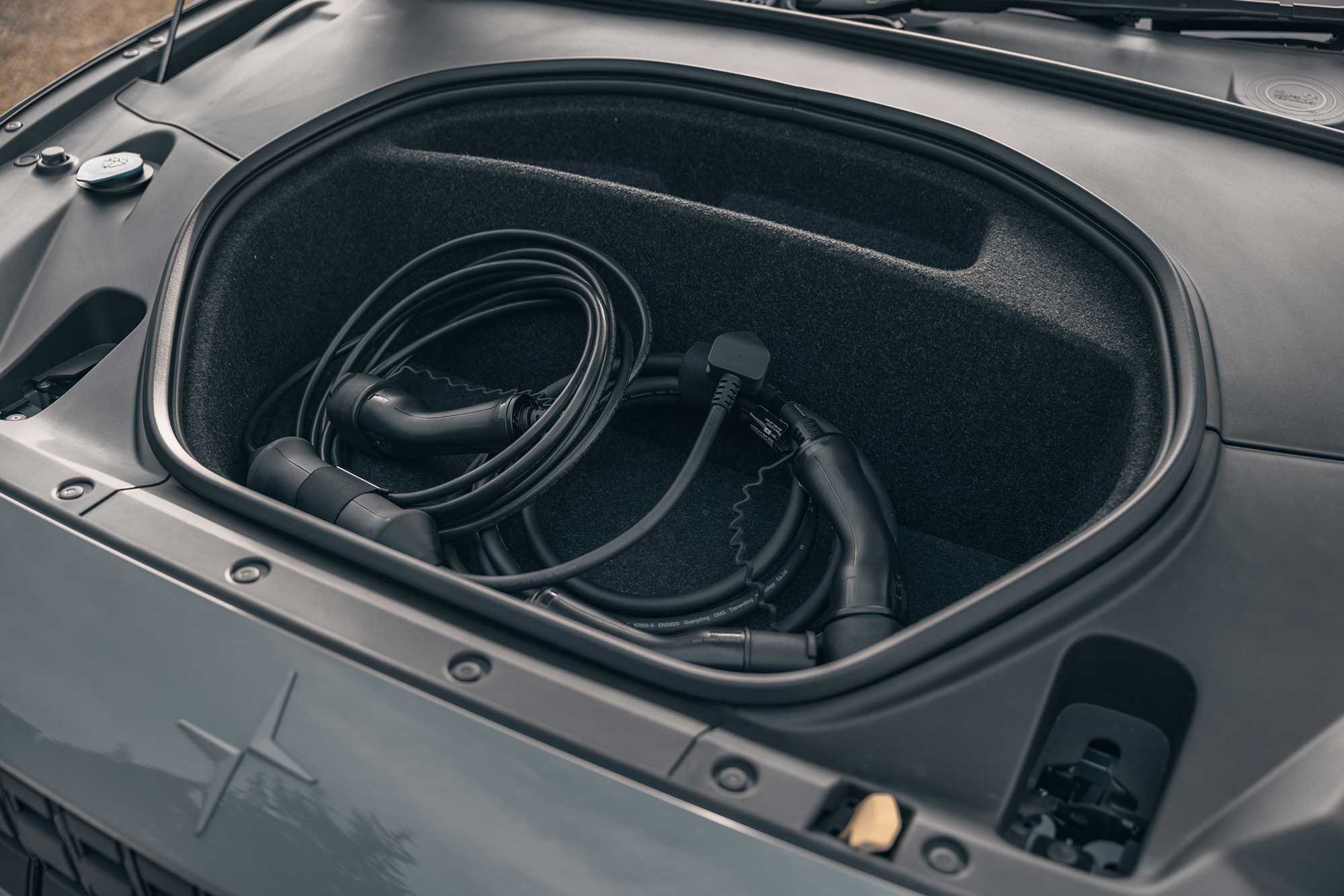 The twin-motor layout of the Polestar 2 gives it rampant performance. It has the capability to accelerate away from a stationary position in a way that will ensure the back of your skull intimately knows the surface of the headrest. The instantaneous remittance of electrical torque feels as if you were to point the car in the right direction it could potentially slow the Earth’s rotation. Polestar says it produces 660Nm, but it could simply state ‘All of it’ as the official torque output figure. 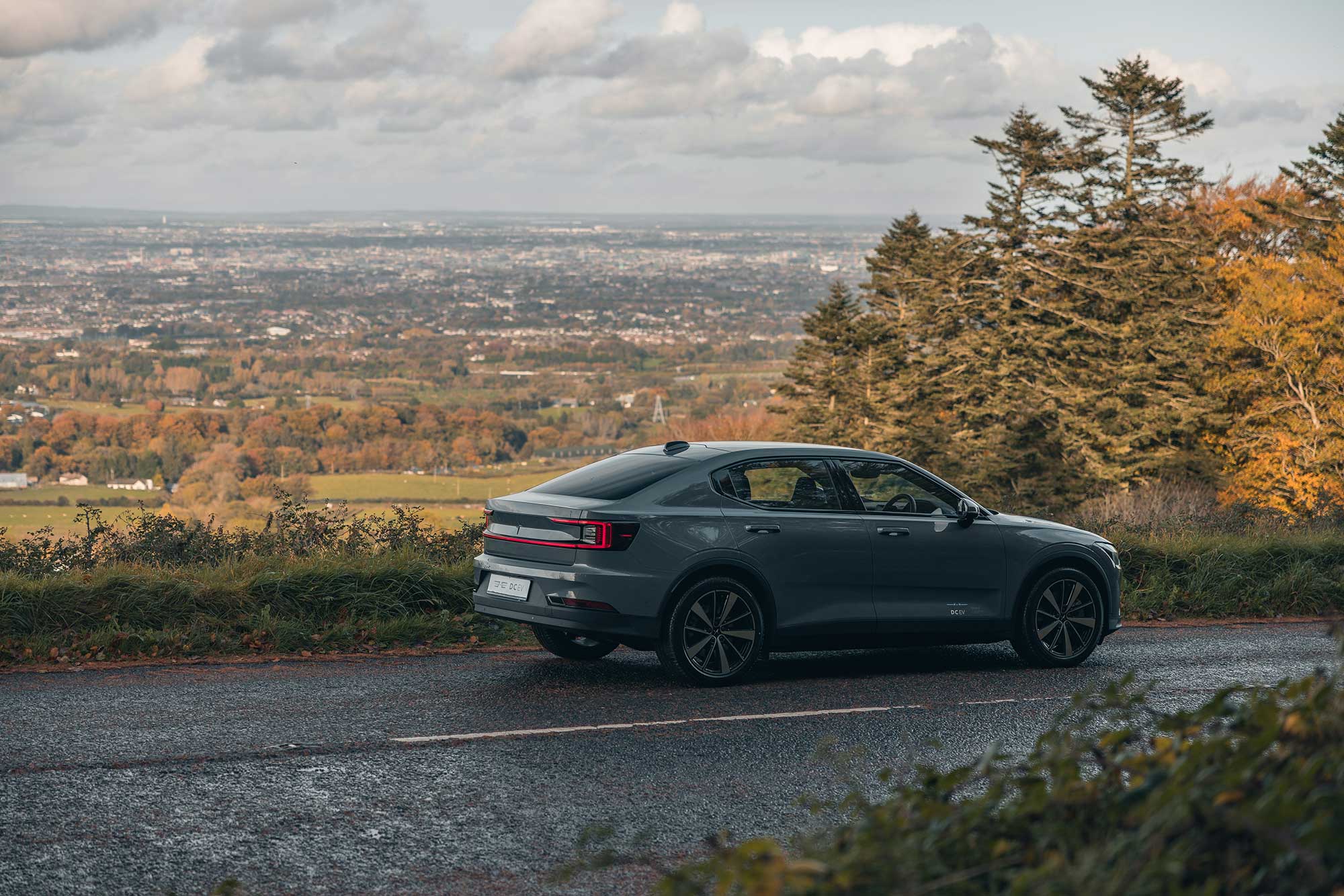 The Polestar 2 isn’t a one-trick pony either, and how it deals with varying surfaces highlights the finesse of the suspension, in particular how the damping reacts to bigger hits. These are soaked up and insulated in the kind of way that feels as if the car is hewn from one entire billet rather than an assembly of individual parts. 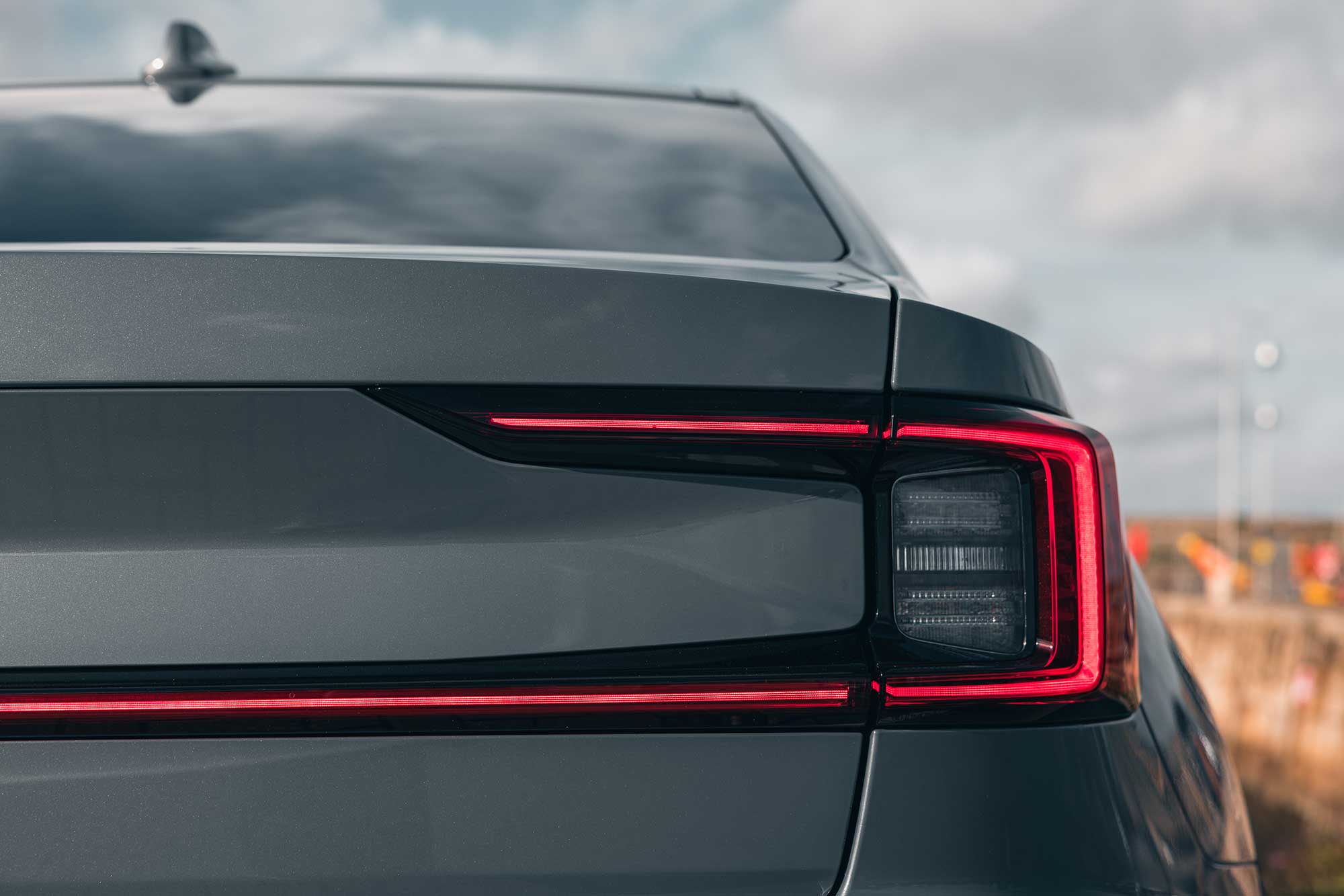 If you’d prefer to get your inner chassis geek on, Polestar will offer a fully adjustable suspension option with Öhlins Dual Flow Valve hardware that owners can dial to 22 different levels. However, one word of warning: accessing the rear suspension to adjust requires removing the wheel arch linings making it not the work of a few moments, which is why they leave the factory pre-set to 8 of 22. This addition also adds slightly larger front brake discs, denoted by gold painted calipers. Sticking with the standard suspension won’t leave you feeling short-changed as it’s every bit as good at tackling the day-to-day stuff. 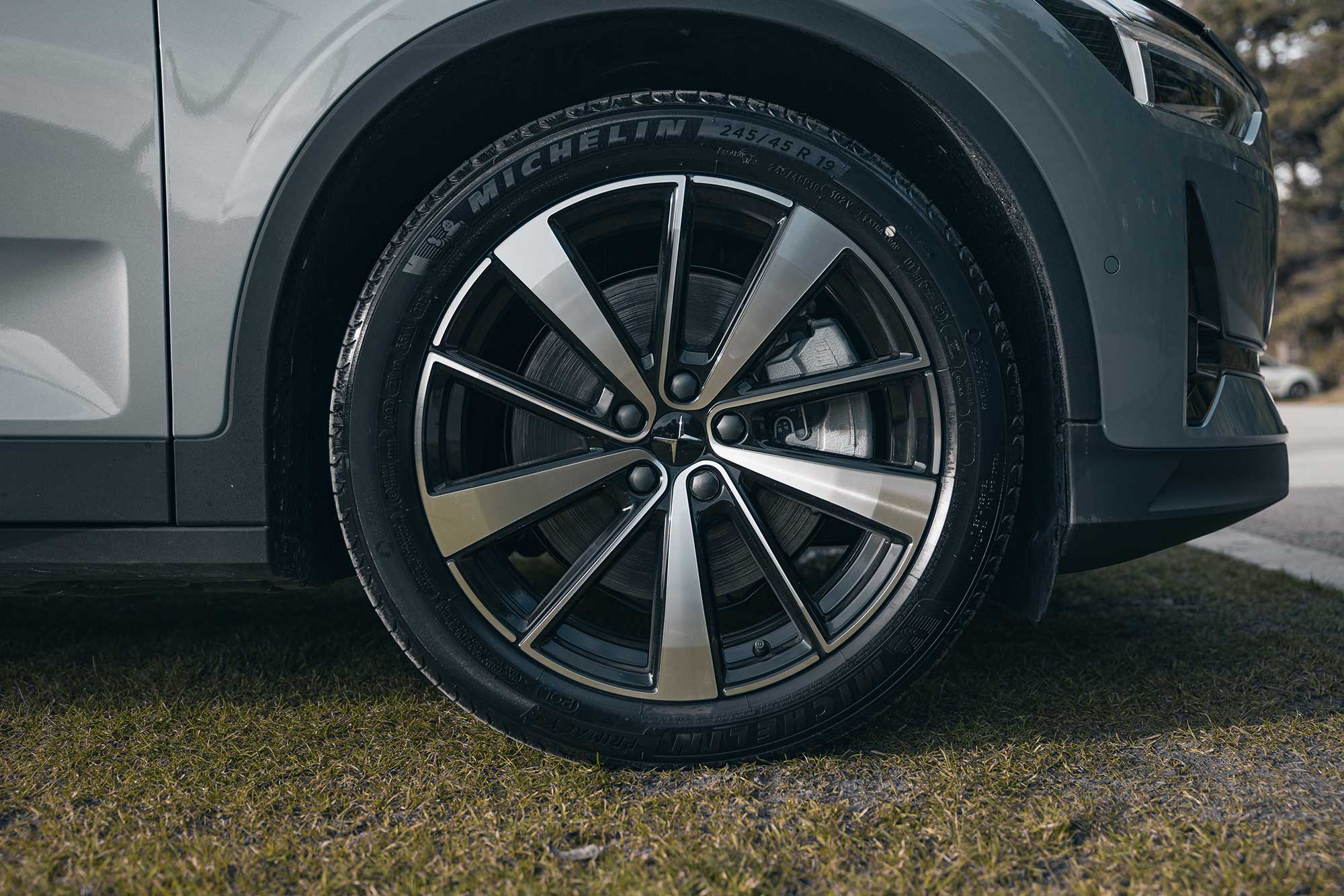 The Polestar 2 becomes a relatively comfortable and refined car when you aren’t exploiting all of that performance. Motorway journeys are completed with minimal noise intrusion, and with so much extra power in reserve, you can be confident of quickly getting out of any undesirable situations. Driving around the city streets requires only the lightest touch of the accelerator as the powerful regenerative braking effect simulates one-pedal driving while extending the battery range. Steering is nicely weighted too, while a range of cameras assist when you need to squeeze into a parking space. 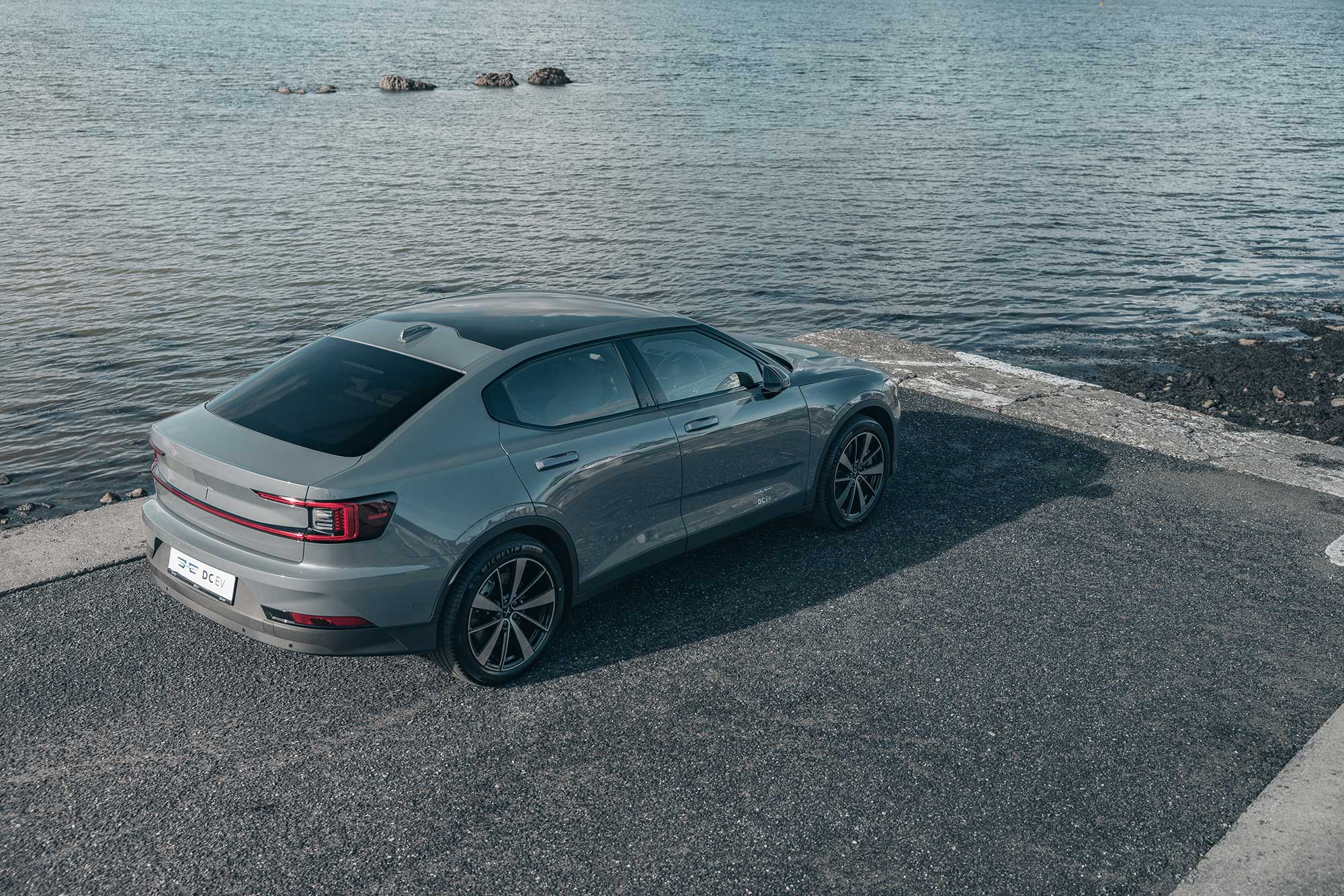 The coolness of the Polestar 2 extends beyond its Scandinavian roots and is enough to give Tesla a severe case of brain freeze. A design-led aesthetic, upmarket interior and ample performance both dynamically and electrically puts the Polestar 2 firmly in the premium end of the electric car market. 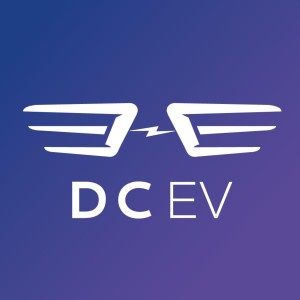 Opt-in to hear from us about new EV reviews, promotions and more.